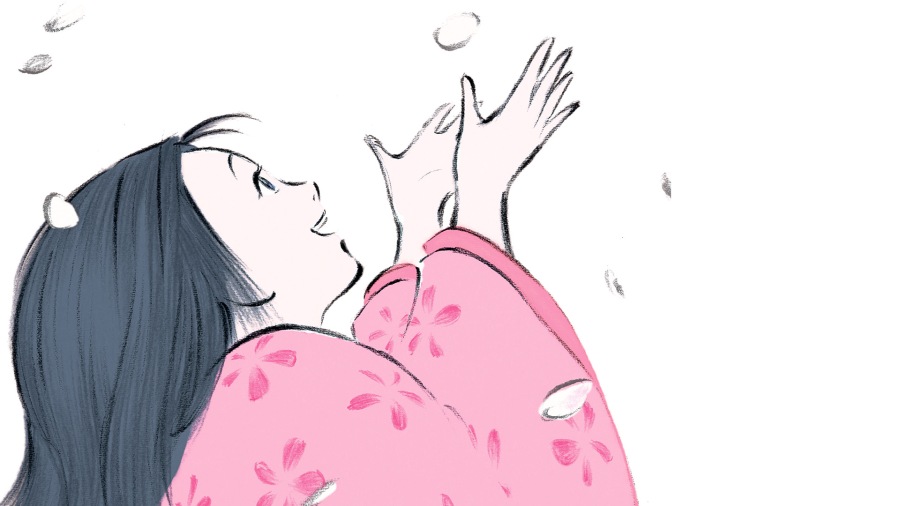 Kaguya-hime no Monogatari (The Tale of Princess Kaguya) is a 2013 animated movie produced by Studio Ghibli and directed by Takahata Isao. Based on one of the oldest and most popular folktale, “The Tale of the Bamboo-Cutter”, the movie shows the story of a nymph who descends from the Moon to the Earth.

In his early career, Takahata was inspired by French and other European animators and the tales they told. As his career progressed, he was more engrossed in the stories of his own country. That thought gave birth to the classic “Grave of the Fireflies”, one of the saddest tales ever told in cinema. His interest in telling stories rooted to Japan reaches its height in The Tale of Princess Kaguya.

The movie is painting in motion. Beautiful water-colour hand drawn paintings made me feel like I was watching old Japanese paintings in succession. The animation looks rough (a deliberate choice), the line art gets chaotic at some points (the best use of “abstraction” as said by some of the best animators in the industry) and does what it has to do (bring the characters and story to life).

The main characters are multi-dimensional. The woodcutter seems cold at times when he uses divine powers to name Kaguya a princess and makes her stay as a noble. However, he thinks it is the best thing to happen for a child who was divine herself. Kaguya’s mother is kindlier, although she also desires to make her a princess. Kaguya herself is a fun-loving girl who dreams of escaping back to her village when she is brought to the mansion in the town. Her sense of freedom is depicted well in the scenes in which she unleashes a cat, frees a sparrow from the cage, and dances when she sees sakura in the Spring.

The movie gave me a feeling so intense it is impossible to explain in words. Takahata’s mastery of story-telling, his artistic sense and vision has produced a movie that will soon be regarded as one of the classics.