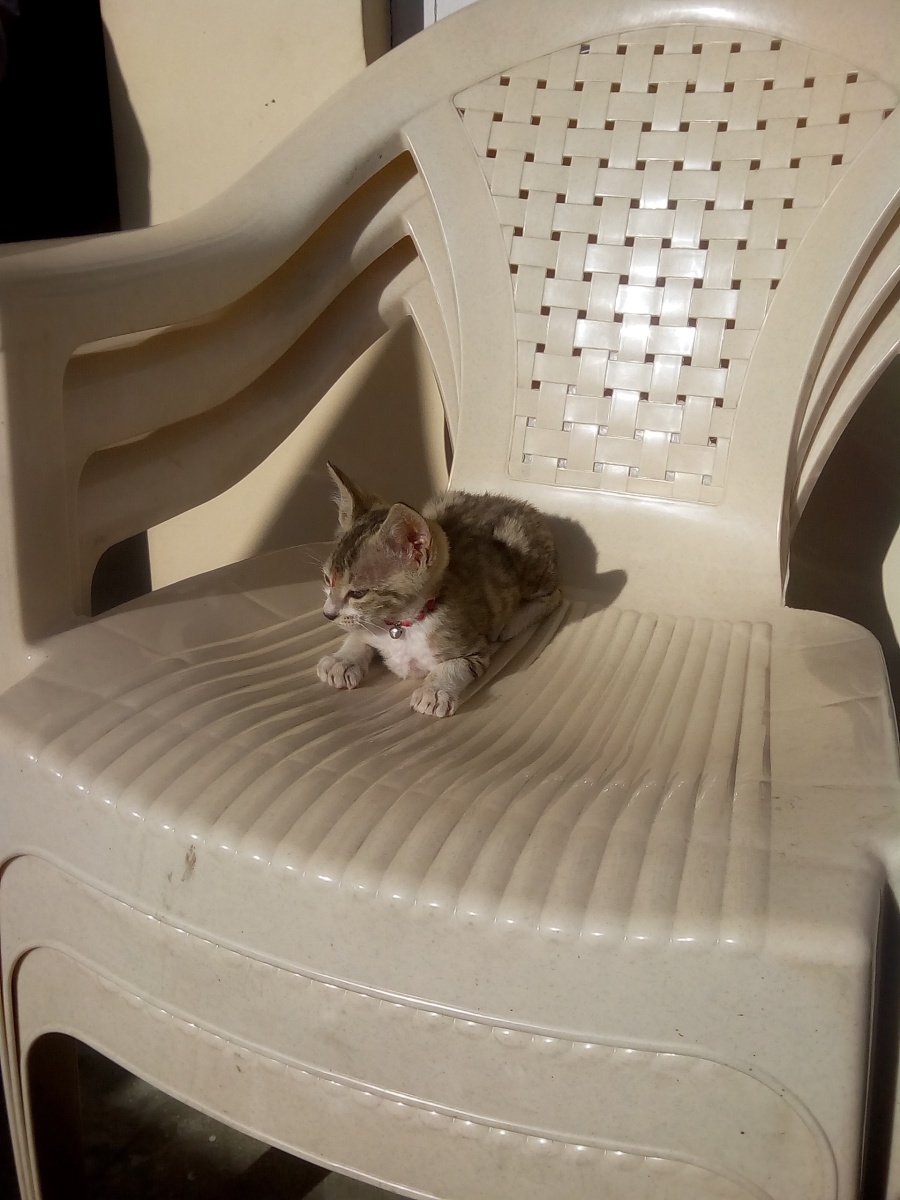 I am astounded every time I look at her. She moves with grace and agility, plays with the table tennis ball as she should play with a mouse (and like a pro footballer), and jumps like an athlete. She grabs a piece of rag and drags it around. She smells the ground and discovers every corner of the house. She covers up her liquid and solid excreta. When she is hungry, she looks up, her eyebrows narrow, and cries, “Myau Myau”. Except during such hunger and times she’s irritated, this little tabby kitten understands the instructions we give her. Who teaches her to do all these things she does?

I met her first the first time in November with her twin. Their mother had left them after keeping them in a drum under the stairs. They were crying. We waited for their mother’s return but that cat did not return. We kept them in a box and started feeding them with milk in a bottle. The nutrition in the dairy milk we get is non-existent. The twins survived but were malnourished. We named them Lily and Billy.

Even when they were malnourished, Billy was the smarter among the two. She had figured out how to jump out of the box, how to play with her sibling and how to irritate her. Life was going on pretty good for them until two weeks later when their mother came back with two other kittens. Would she recognize and accept Lily and Billy and take them away? We thought it would be good if she did and at that, we made the mistake we should never have.

We showed the cat Lily and Billy on our roof. They were smaller than the other kittens she had brought but she seemed to recognize them from their scent. She wanted to take Billy first but the kitten was too stubborn and reluctant. She did not let the cat carry her. Lily too resisted but she was not as smart as her twin. The cat caught her scruff and took her away.

The mother cat came back again. We decided to give up Billy as well. We did not know whether Lily-Billy could survive. Even if they died, it would be nice if they died together, we thought. After an effort of more than half an hour, the cat took Billy away. A little farther, she could not carry Billy. She was still struggling to get away. The cat tried her best to take her away but when she could not, left her. Billy cried alone on that balcony for more than an hour in front of our sight before we decided we would now adopt her as long as she wants to stay with us.

Meanwhile, the cat took away the fourth kitten and never returned for the kitten. She came back a few times to steal milk and we haven’t seen her for more than a fortnight now.

Does Nature teach her? How, though? Could Billy’s genes have carried her natural instincts and behaviours? Does the DNA carry all the things she needs for survival?

It’s strange to note that humans have very few individual survival instincts. We are not as agile as the cat, we don’t have the physical strength they have. We don’t even cover up our excreta as a natural instinct. It’s a learned social behaviour. Why does a cat have more survival instincts and more unique natural behaviours than a human? Aren’t we vain in saying that we are the smartest or the most intelligent creature on the planet? I have seen the kitten picking up our language before we picked up hers. How are we the only sapient beings? And finally, I came to the question that has intrigued people for ages: why are we here thriving (not just surviving) against all odds?

Yet, it is in our head the brain lies and it has the ability to analyze the world like no other creature in the world. We are the only creatures that can understand the secret of this world and that of the universe. Only we can alter our natural instinct of fear to compassion.

Are we really thriving to understand the real secrets of our lives, how we originated and to care for the lives around us, to coexist with every living being in harmony? Eastern philosophers and poets of my own country have answered “Yes” to the question.

But is there any force or energy that compels us to survive, to contemplate and to understand? Why is the Nature the way it is? Why is the cat the way she is? What is the source of the chaotic order that rules the Earth? I have come to believe in the existence of that energy that has created this chaotic order. I have now come to believe this energy is the God–the Creator, the Caretaker and the Destroyer.

In these two months, the cats have taught me a lot of things about life and the way we behave and feel. And we can’t always control everything that happens. We make mistakes we can’t amend. We don’t know what happened to Lily but Billy continues to grow and to impress. She is here in my house with a purpose–to teach me about other living beings, including humans.

Drosophila aka fruit flies are important in genetic studies. In this article on Heather Notes, Heather explains how these insects are being used in study of proteins related to chronic pain (allodynia) and their repression.
http://wp.me/p6wVNB-6Zu