I am not someone who would take the first step in breaking rules. I am not the one who would like to be in a crazy situation. But one day, I was pulled- by fate or friendship, whatever you may call- to this weirdest, craziest birthday party ever.

We were on the geological excursion- a once in a lifetime experience. The tour was becoming too mundane. Wake up at about five in the morning, have morning meal at eight run to the field at nine. Return back within five-thirty in the evening, dine at six and work until midnight before going to sleep. Most of us were following the same routine. There was a need for change.

Some boys had tried spicing up life already. In the room where I had stayed, a friend of mine had been awakened in the night by some of the boys on his birthday. It was fun then but the teachers scolded them, albeit indirectly. Two nights later, we had to celebrate a birthday. We had to make it special.

Girls took the initiation. They prepared everything- unknown to most of us. They decided to take permission from the Field-in-charge Deepak sir. Laxmi did the talking. I was there when sir said to celebrate the birthday in silence.

The wait was long. I had some work to do, however. Time passed on easy. Rabi dai and Pawan dai made faces and took selfies and clicked photos. Sanjeev was probably waiting for the midnight but he did not know what was in store. Anish was busy in his work and we had to remind him at the last moment.

We waited in the dark. The birthday-girl had been sent away by the other girls. They came out as well carrying slices of cakes with them. It was almost January 14. What were we doing at the time when ghosts move around for food? We were talking in excited whispers, eager to wish the birthday-girl.

She stepped up. We all hid ourselves behind the walls of the dark corridor. Within thirty seconds, as soon as she stepped up the last stair, we all jumped and wished, “Happy Birthday to You! Happy Birthday, Romi!” We wished the birthday-girl in whispers. We had done it. We had wished her in the midnight, with permission, in whispers! (Bajrangi Bhaijaan’s ‘permission leke, taar ke niche se’ was running on my mind!)

Romi was awed. She could not believe it. She wanted to jump and shout. “Ssh! Keep your voice low!” We demanded. The same warning used to come up whenever someone tried to speak up loudly. The party continued with cakes. Everyone wished in whispers again. Apart from the aforementioned people, excluding Deepak sir, Prasmita, Bhawana, Pratigya, Ravi (not to confuse with Rabi dai), Nirusha and Sarita had joined the party. We even took selfies to commemorate the moment. Within half an hour, Anish posted one of the photos on Facebook. 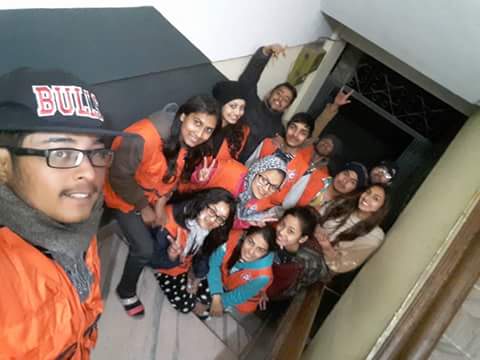 [Before the end of this article, Romi, I would like to wish you Happy Birthday again. I know it’s been more than a week already but I also can’t wait another year to wish you.

Along the road of life – miles,
Never let go off your smiles!
May happiness devour all your fears,
Never you be soaked with tears!
With Pure Heart, may you win the World,
Blessed with Friends as precious as Gold!
Happy Birthday!!]

5 thoughts on “The Craziest Birthday Party Ever!”